Super Smash Bros. 6 is an upcoming Smash Bros game made by Smashteam Soft and Nintendo In this game, many newcomers arrive as well as new stages, and items as Swords, Firearms. As the title implies, most veterans are receiving revamped movesets. This game is also anti-clone, so any returning characters that were previously clones now have moves that are more fleshed out and different than others. 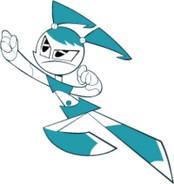 Jenny wakemen
Add a photo to this gallery
Retrieved from "https://supersmashbrosfanon.fandom.com/wiki/Super_Smash_Bros._6_(2021,_2022)?oldid=82335"
Community content is available under CC-BY-SA unless otherwise noted.